Textile and apparel firms have spent many years developing fabrics that protect against electric arcs and short duration flash fire hazard while also addressing human factors for workers wearing garments under different work conditions. Numerous materials in the market have been developed and subsequently evaluated using tests ranging from bench-scale tests of flame resistance and thermal protection to full-scale garment tests that gauge the performance of an entire ensemble against an electric arc and short duration flash fire.

Identification of potential work environment hazards and subsequent development of clothing to protect against such hazards is a multistep process that takes significant time and resources. For many years, process steam and hot water have been used with little attention given to workers wearing specialized garments intended to mitigate the hazard. Current literature on burn injuries indicates the number and severity of steam accidents rivals and may far exceed those of burn injuries from flash fires. Materials that work well for many thermal hazards may not protect from low-pressure steam or hot water hazard.

In partnership with several organizations, the Protective Clothing and Equipment Research Group at the University of Alberta developed a method to evaluate the steam-protective abilities of textiles. Intermediate pressure steam at a local refinery was used to simulate a typical hazard. Process steam was directed at an instrumented cylindrical form and energy transfer measured. Separation distance and fabric covering the instrumented form were varied to indicate the performance of a range of textiles under these conditions. It was immediately apparent the distance between the steam source and person is a very important parameter determining the hazard severity. Also evident was fabrics could be significantly deformed under pressure produced by the jet with a resultant change in material characteristics. 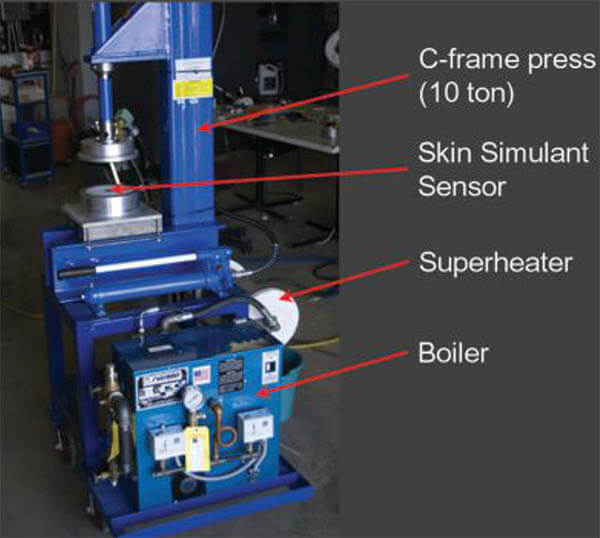 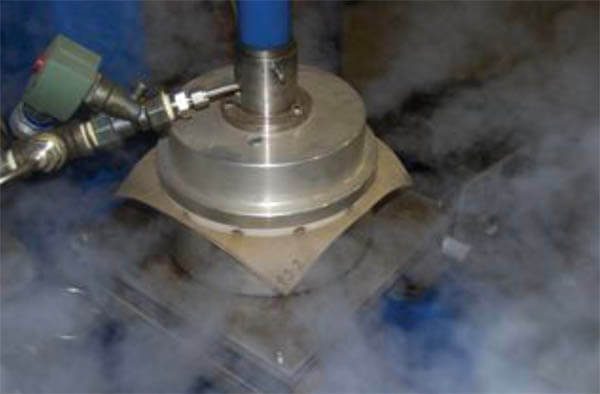 Based on the fieldwork, a small-scale apparatus was developed to allow material evaluation in the laboratory. The device (Figure 1) consists of a small boiler with a superheater. The boiler produces saturated steam, and the superheater allows increasing temperature above saturated conditions. Steam is routed to a nozzle positioned above a test specimen, and exposure time is computer-controlled. A skin stimulant sensor, located below the specimen, is used to measure transmitted energy and subsequently to predict burn injury.

Proposed specifications for two levels of protection
Firms in the oil and gas sector requested fabric performance be defined for two levels of protection — Level 1 garments that could be worn onsite most of the workday and Level 2 garments that could be worn for short-term but higher-risk exposure situations. A proposed two level protection specification was developed from the test data, based on energy transmitted through the material (less than 300 kJ/m2 for Level 1 and less than 200 kJ/ m2 for Level 2) and time to the onset of a second-degree thermal injury (greater than 5 s for Level 1 and greater than 60 s for Level 2). A number of fabric composites were evaluated against the proposed specifications and, almost without exception, achieving a Level 2 required an impermeable material as the outer shell material and an insulating fabric behind.

As work moves forward in the development of a standard test method, understanding of the hazard and its effects continues to grow. Burn injuries are costly to the employer, devastating to the worker, and preventable. At the heart of a safe work environment is the protection of workers. With current materials available on the market today, workers can be protected from burn injury, be it from an electric arc, flash fire, and now steam or hot water. In your work environment, are you protected?

The article above was written by M.Y. Ackerman, J. Batcheller, E.M. Crown, and J.D. Dale of the University of Alberta, Canada.